WRITERS: How do you turn Writer's Block into Writer's Breakthrough? 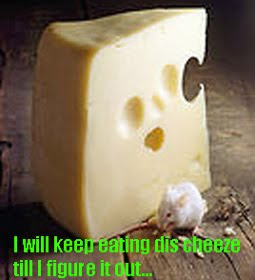 I received an email a month or so back, from a writer working on her first manuscript. She was stuck firmly in the middle of her manuscript and was unable to move forward. Her question: What do I do when I get writer's block? How do I work through it and could I give her any advice? My answer: Sadly, I didn't have one!

I never really thought about "writer's block" until now. When I come to a point in a story where I don't know where the story is going next, I set it aside for a day or two and the answer comes to me, usually at some weird time, like the middle of the night, or when I'm doing some mundane task--either way, it always seems to come. But now that I am thinking about writer's block, I'm wondering is there a good way to overcome it other than nearly tripping over myself on the treadmill when I have that 'eureka moment'?

How do YOU deal with the infamous writer's block? Do you use an exercise or a method to work through it? Do you beat your head in despair for weeks, until the answer finally comes, just when you're about to trash what you've written? What are your tips and tricks to turn your writer's block into a writer's breakthrough?

WRITERS: What are YOUR Great Expectations? 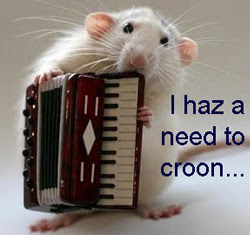 For me, Charles Dickens made me want to be a writer. In the first chapter of GREAT EXPECTATIONS, Dickens describes how Pip makes up images of his dead parents in his head, by nothing more than the shape of the letters on their tombstones.

In every book, Dickens always manages to capture my attention from page one, something I find wonderful and vital. There is nothing worse than having to struggle through the first chapter of a book.  We've all done it. When I read a shiny new book and see the images in my head right away, I know I'm hooked--immediate connection. I want to connect with readers like that!

I've told you my "road to publication" tragedies and triumphs. What are yours and what are YOUR great expectations?

1. What book and/or author inspired you to write?

2. Why did you feel so inspired?

3. What is the hardest and/or best part about your road to publication? Where do you see your writing future going?

WRITERS: Can Fantasy turn into Farce? Toot Your Horn Friday! 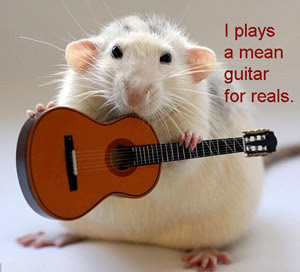 As you know, my debut novel is an animal fantasy about rats. For the most part, my rats have kept their rattiness, but Nightshade City rats are very special creatures.  They have super intelligence and a lifespan parallel to humans, not the 3-4 years a normal rat lives, they're quite strong and sizeable compared to your typical rat, not to mention--they talk! There are reasons behind these humanlike qualities my brilliant rats' posses, but you'll have to wait to find out what they are!

So, my question to you is, can a fantasy novel go too far? When does a fantasy novel become, well, too fantastic? When does a book become so far-fetched even though you know it's a made up world or creature or a combination of the both, that the fantasy turns into farce? Can even a well written story fumble if the fantasy aspect it too extreme or does a well written story trump all? 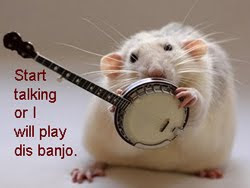 Thanks so much everyone for sharing in my recent excitement over my book! It's a lot of fun to share my good news, but it's also inspiring to hear yours!

So, what's new with YOU??? It can be anything! Did you get a request from an agent? Did you get the best rejection ever that actually helped you with your query or manuscript? I got a few of those along the way! Did you finally finish a beloved WIP or write the best scene ever? Or is your news totally unrelated to writing, like my good friend Jen K Blom, who just gave birth to her darling Izzy in Berlin (and got a book deal two weeks earlier, the little brat!)

What the heck is going on with YOU??? 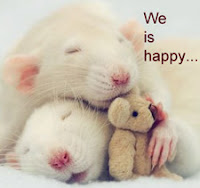 So, I edited like a crazed editing maniac this weekend, making sure I had my copy edits done so I could FedEx them back to Holiday House today. I was up to the wee hours of the morning Saturday night, when an author friend of mine, Jill Myles, let me know she spotted NIGHTSHADE CITY on Amazon! Gah!!! How exciting! On top of that, I actually have a sales ranking which means people are buying it! Wuh, already???? Don't stop! Please don't stop! One more thing to make me nuts I suppose! Right now, there is no cover image yet, as the fantabulous Omar Ryyan (Illustrator of Mistmantle covers and way more) is putting on the final touches. Amazon is putting together my "Author Central Page" which I can't wait to see, little ol' me on the big, fat Amazon website!
I already had a reader email me and ask if Nightshade City was like Redwall or Mistmantle. I'm happy to say it stands on it's own, but if you enjoyed the Redwall or Mistmantle series, I'm also happy to say in a hopeful little whisper, I think you'll enjoy mine too!

Now I have to finish the second book!!! Back to work for me! Ack!

WRITERS: You really can do it!!! You can get published!

So, come tomorrow morning I have a FedEx arriving!  Once I get it I need to buckle down with my shiny new colored pencil and get to work on Nightshade City's copy edits! I have to FedEx them back to my editor for arrival on Monday! Yeah, no pressure there! At least it's the good kind of pressure! My ARC is going to print next month!!! I can't believe I'll get to hold MY book in my hands.

I guess I want to inspire you if I can to keep writing and working and doing what we all LOVE so much! If you told me one year ago I would land an agent and sell my first two novels, I would have thought you were crazy or pretty drunk! It's amazing what can happen in just one year!  Look at my stats!!!

Long story short, dreams happen every day! Our hard work counts for something!! It really, really does!

WRITERS: Who knows you write? Are you secretive or a jabber mouth? 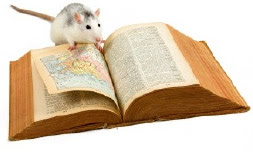 I vowed to myself that only my husband (my free freelance editor) would know of my writing until I had an agent. It was just something I needed to accomplish on my own. I didn't want family members always asking me, "So, how's the writing going? Are you the next JK Rowling yet?" or have them whisper behind my back, "Yes, that's her, poor dear thinks she can get published." Insecure on my part--DEFINITELY! I just didn't want to put myself out there. It's scary sharing your innermost wants and wishes with others. What if they secretly think you can't hack it? What if they talk behind your back? Okay, there's that ugly insecurity again! Ugh, hate that!


So, how about you? Do you scream your writerly ways to the rooftops?  Does everyone know YOU are the writer in the family, working your fingers to the bone on your latest manuscript or are you like I was, secretly hiding your talent away until the time is right to reveal to the world?

WRITERS: RATS VS POSSUMS...The Throw Down is ON!!! 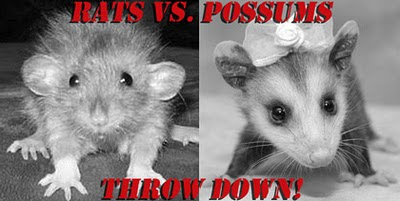 Jen K Blom
(Someone needs to update their picture, e'hem!)

For months now there has been a RAT VS. POSSUMS throw down brewing between me and writer, Jen K Blom! And now that my good buddy has announced the sale of her debut, the throw down can officially begin!


Have you ever met one of those glittery people you just immediately take a shine to (despite their possum obsession)? Well, my good friend and fellow writer, Jen K Blom, is one of those special people!


As luck would have it, my buddy Jen's debut middle grade novel, Possum Summer, has been sold to Holiday House Books, coming out fall of 2011, right along with Nightshade City's sequel, Billycan! Now you all know how I rave about Holiday House, so it was crazy to me when my very best German bound bud, received an offer from them to buy her debut just last week! Even more providential, her shiny, new editor turns out to be my amazing editor, Julie Amper! What are the odds? Jen loves her agent, Marlene Stringer, as much as I love Marietta, so we have to plug her too!


So, long story short, follow this girls blog if you don't already! Jen is not only an amazing author, but hysterical and insightful! She has a cool husband named Soren and a there is an 80% chance her cat is plotting to kill her (jealous of possums perhaps?)! Jen not only just got her first book deal, but she has a baby coming any day now! So please shoot over to her blog with some warm congrats to her and the possums and little Izzy who is about to make her debut soon and follow, follow, follow her blog (mine too)! :)


The moral of this story: Rats rule, possums drool!