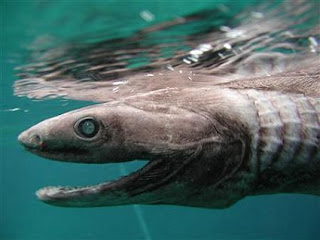 It's amazing how close we grow to our characters. My new book, GOBLIN SHARK RISING (early 2013) has introduced me to some new friends. It centers around three prehistoric shark clans, the goblin shark, the frilled shark, and the sixgill shark, all very mysterious deep-water sharks that have changed little since the days of the dinosaurs, true living fossils of the sea. Below are some short videos I wanted to share about this creepy, yet amazing creatures.
This is the goblin shark, a rare species, that has a very special skill! Just watch.
This pretty lady is a frilled shark. Look at those rows of
pitchfork teeth on this eel like shark!
These big fellows are known as Sixgills. They are massive in size and strength, rivaling the great whites, though they live in the deepest depths of our oceans.
Posted by Hilary Wagner at Tuesday, February 28, 2012 24 comments:

Winner of the Lexapros And Cons Giveaway!! 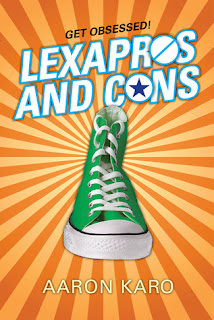 And the winner is....
♡♥♬ Louis ♬♥♡
Please email me your mailing address at
h.wagner@nightshadecity.com!
Congrats, Louis!!
Posted by Hilary Wagner at Wednesday, February 22, 2012 4 comments:

Okay, I've heard from many readers and editors there needs to be a lot more humor in YA, and well, I've found it! LEXAPROS AND CONS (Farrar Straus Giroux, April 2012) by Aaron Karo, a well known comedian, is hilarious and touching. This is his debut novel and it will appeal to guys and girls equally--though girls might blush a little at some of the wordage, though they'll be laughing while they they turn beet red! Read the opening paragraph and you'll know what I'm talking about! ;)
The book blurbage:
Chuck Taylor’s OCD has rendered him a high school outcast. His endless routines and habitual hand washing threaten to scare away both his closest friend and the amazing new girl in town. Sure he happens to share the name of the icon behind the coolest sneakers in the world, but even Chuck knows his bizarre system of wearing different color “Cons” depending on his mood is completely crazy.
In this hilariously candid debut novel from comedian Aaron Karo—who grew up with a few obsessions and compulsions of his own—very bad things are going to happen to Chuck. But maybe that’s a good thing. Because with graduation looming, Chuck finds himself with one last chance to face his inner demons, defend his best friend, and win over the girl of his dreams. No matter what happens, though, he’ll have to get his hands dirty.
Okay, first off the MC's name is Chuck Taylor. Yep, just like the shoes. You've got to love that! Secondly, this is an accurate, yet hysterical depiction of OCD. It's perfect, not just for kids who might have OCD, but anyone who'd like a better understanding of it. I've personally never known anyone with OCD, so this book really opened my eyes to what it's all about. Lexapro, by the way, is a drug used to combat OCD symptoms.
Karo's candid and genuine writing style will resonate with kids, namely guys, but it's hilarity will attract all types of readers. Coming in at 230 pages, this is actually a quick read. The witticisms and easy language will make this book fly by. I recommended this to any reluctant reader and to any writer who's interested in writing a uniquely funny book. I think of this as a teen version of the Diary of a Wimpy Kid and Karo is going to amass a huge fan base of teen readers.
Now for the good stuff, the GIVEAWAY!
I will be giving away a brand new ARC of Lexapros And Cons to one lucky reader! The book doesn't release until April, so this is a great opportunity to be one of the first readers!
To enter the LEXAPROS AND CONS giveaway:
1. Follow this blog, because I will be soooo happy that you did. ;)
2. Leave a comment.
3. Reveal your favorite color of Chuck Taylor shoes! (this rule is optional). Mine was pink, by the way!
4. Winner will be announced on Wednesday of next week! 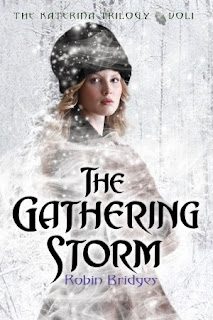 
Shelli Johannes-Wells takes a tour of The Reading Room
Tracy Banghart has double-love for THE SILVER PHOENIX and FURY OF THE PHOENIX
Posted by Hilary Wagner at Thursday, February 09, 2012 14 comments:

The winner is Akoss!!!
Please send your address to me at h.wagnerATnightshadecityDOTcom so
you can get your signed copy of The Death of Yorik Mortwell!
You're going to love it!