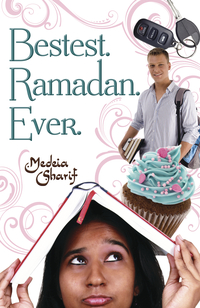 Do you know one of those people who's pretty much awesome at everything and makes you feel like a total heel? Well, if you don't know her already, here's one more to add to your list! Yes, you guessed it, I'm talking about debut YA Author, Medeia Sharif!

Medeia is not only a gorgeous debut author (ummm...did you see that hair and those eyes), but she holds a master's degree in psychology, she's a teacher, and get this folks, she's a member of Mensa! And yes, I feel even dumber now just writing this post! ;)
In any case, I'm so happy that Medeia's book has finally released. When you read the above, you might think with all her brains, her writing might be kind of stuffy, right--because she's such a smarty-pants? No way! Her debut novel, BESTEST. RAMADAN. EVER. is anything but stuffy! What kind of stuffy person uses the word "bestest" and in the title no less?
Here's a little blurb from BRE to show you what I mean:
During Ramadan, we're not allowed to eat from sunrise to sunset, for a whole month. My family does this every year, even though I've been to a mosque exactly twice in my fifteen years. My exercise-obsessed mom—whose hotness skipped a generation, sadly—says I could stand to lose a few. But is torture really an acceptable method? I think not.

Things wouldn't be so bad if I had a boyfriend, but my oppressive parents forbid me to date. This is just cruel and wrong. Especially since Peter, a cute and crushable artist, might be my soul mate. Figures my bestest friend Lisa likes him, too.

To top it off, there's a new Muslim girl in school who struts around in super-short skirts, commanding every boy's attention—including Peter's. How can I get him to notice me? And will I ever feel like a typical American girl?
Doesn't this book sound like a blast? Kirkus and Booklist say so!
"A humorous, hip look at the ups and downs of fasting for Ramadan within the context of intergenerational and cultural challenges."—KIRKUS REVIEWS

"Upbeat and breezy, this novel will be a useful addition to many YA collections seeking diversity with a light tone and a focus on family, friends, and faith."—BOOKLIST
Long story short, I think Medeia is awesome and I'm so thrilled her book is finally out! Please follow her blog if you don't already and of course...BUY HER BOOK, all the links you need are below!!
BESTEST. RAMADAN. EVER., Flux, 2011
ISBN: 0738723231 (ISBN13: 9780738723235)
Purchase from Amazon, Barnes & Noble, Powells, Indiebound, Borders, Books-A-Million, The Book Depository, Flux, Kobo
CONGRATS, MEDEIA!!
Posted by Hilary Wagner at Friday, June 24, 2011 10 comments:

It's Here! THE WHITE ASSASSIN ARC!

Did you ever have one of those 'feelings'? That 'I need to go do something right now even though it makes no sense' feelings? Well, I did at 11pm last Saturday. I turned off our alarm (everyone was already asleep), quietly opened our front door, and crept out into the dark and got the mail--something I'd normally never do because I'm far too lazy! So glad I did, because look what was inside! I had no idea it was on its way, so along with a ridiculously high cable bill, what a nice surprise to find in my mailbox!!!
My blog tour is coming up in September/October and thanks to everyone who has offered to participate! I'm so excited for this book. I worked so very hard on it. I think after the third rewrite I finally got it right! ;)
xoxo -- Hilary
Posted by Hilary Wagner at Wednesday, June 15, 2011 23 comments:

MISERERE: An Autumn Tale, by Teresa Frohock out NOW!

Today, I have the great pleasure of telling you about author, Teresa Frohock's amazing debut fantasy novel, MISERERE: An Autumn Tale. A new release from Night Shade Books, a great independent publisher, who is racking up SF/F awards, and is known for their fantastic taste!

Here is the blurb:
Exiled exorcist Lucian Negru deserted his lover in Hell in exchange for saving his sister Catarina's soul, but Catarina doesn't want salvation. She wants Lucian to help her fulfill her dark covenant with the Fallen Angels by using his power to open the Hell Gates. Catarina intends to lead the Fallen's hordes out of Hell and into the parallel dimension of Woerld, Heaven's frontline of defense between Earth and Hell. When Lucian refuses to help his sister, she imprisons and cripples him, but Lucian learns that Rachael, the lover he betrayed and abandoned in Hell, is dying from a demonic possession. Determined to rescue Rachael from the demon he unleashed on her soul, Lucian flees his sister, but Catarina's wrath isn't so easy to escape!

And look her blurbed her book and loved it:
"Miserere is about redemption, and the triumph of our best impulses over our worst. It's also about swords, monsters, chases, ghosts, magic, [and] court intrigues. It's also really, really good." --Alex Bledsoe, author of Dark Jenny

Teresa has an author photo, but this is my favorite shot of her, so I'm using it! Ha! Teresa is just an all around awesome chick! She's a boot-wearing librarian, who likes her books, well, lets just say a little on the dark side! She's been a great friend to me, and always has a kind word for everyone! If you'd like to know more about Teresa and Miserere, you can follow her blog here! Her agent is the awesome Weronika Janczuk, who of course fell in love with the novel on first read!

My copy of Miserere is arriving on Wednesday and I can't wait to hold that puppy in my hot little hands!

Congrats, T!!!! We are all soooo happy for you!

What is a Book's Purpose?

So, I've been thinking about books lately and their overall purpose. There have been several books I've read in the past few months, where I thought, this part could have been done better or I'd have done it this way (not that I could do it better), but then, I also think, even if I didn't love the book (or even like it), but it brought up emotion in me and made me think about things in some way (even a negative way), did the book do its job? There are certain books I did not love, but I still think about them. To me, so much of our like or dislike for a book is taste, rather than good versus bad writing.
Are there books you've read that maybe you didn't love, but you still think about? Every so often they pop into your head for no reason? Do you think a book's purpose is solely to entertain or to make us think? I suppose, in a perfect world it would be both.
xoxo -- Hilary
Posted by Hilary Wagner at Wednesday, June 08, 2011 10 comments:

I'm spreading Lenny Lee sunshine today! Today is Lenny Lee Fest! Myself and a gang of other writer buddies are spreading the word about this fantastic kid! If you don't know him, I can tell you Lenny is about the sweetest kid you could ever meet AND he's an aspiring young writer! Every since he's read Nightshade City, he's been sending me emails and he and I have become good friends. He always tells me, "Rats Rule!" So, in honor of Lenny and our friendship and of course, LENNY LEE FEST, I have a special post for him today! Below is a scene from THE WHITE ASSASSIN! Book II of the Nightshade Chronicles AND there is a super secret special surprise in Book II only for Lenny, but he'll have to wait to see that!
If you'd like to know more about Lenny and why he's so special, please follow his blog here! There will also be lots of other Lenny Lee posts today, and if you Google "Lenny Lee Fest", you'll find them all, although you probably already know most of these great writers already!
So, here it is kiddo! We love you, Lenny!
The Parchment, scene from THE WHITE ASSASSIN
"There he is," said Suttor, "over there."
By now, all of the young Council members had wandered into breakfast and had been told of Juniper's secret.
They watched in silence as Oberon took his plate of food and strode through Burnstock Hall, proud as a peacock, as if inviting everyone to look upon him.
"He's as garish as that obnoxious red cloak," whispered Clover.
"How did he ever get elected to the Council?" asked Oleander.
"He's exceedingly bright," said Vincent, "that much I'll give him. He's brilliant with numbers and measurements and with Nightshade growing so big, Virden needed help and said Oberon was the rat for the job. The library, the city square, they were architected by Oberon."
"He architected his election as well," added Victor. "By the time he was done gloating to the citizens about all his good works in Nightshade, you'd have thought he single-handedly built the place. Needless to say, he won by a landslide. He's as clever as a country cat."
"Which makes him as dangerous as one," said Carn, "especially when he has everyone's trust."
Picking up the parchment, Clover and Oleander had shown them, Vincent nudged his brother. "C'mon then."
Oberon had chosen the center seat at the center table in Burnstock Hall. Surrounded by family's known throughout Nightshade, families who would re-elect him. He fawned and smooth talked all the while, constantly praising Cole's wife Lali, now Nightshade's head cook, calling her food a national treasure. Given his ever-growing waistline, Vincent was sure that was the only thing Oberon was honest about.
The Nightshade brothers stood behind him for a moment, listening to his shameless flattery. "Oh, I do say, Lali's sausages are as good or better than anything I ever had when I lived in that Topsider's restaurant. I told you about that, didn't I? Why Lali's a master chef," and, "What? You say you've gained weight, Missus Nelson, why you're as fit as a fiddle--still turning heads as great-grandmother!"
Vincent cringed, then leaning down, tapped Oberon on the shoulder with the scroll and grinned broadly.
Looking up from his meal, Oberon gave a greasy smile. "Well, as I live and breathe, the famous Nightshade brothers, fighters for freedom and equality among all rats--the heroes of our time!"
The others smiled admiringly at them. Vincent nodded, but quickly returned to business. "Oberon, there is something my brother and I need to talk you about." He tapped him again on the shoulder, this time making sure he saw the scroll. "A Council matter, if you please."
Seeing the scroll, Oberon's eyes widened. He dropped his fork to his plate, biting his lower lip--clearly panicked. "Oh--I see..." he said uneasily. He noticed all his supporters staring at him. Quickly, his bravado returned. "A Council matter? Of course, I've always got time for that, young Nightshade." Trying not to look nervous, which only succeeded in making him look more nervous, Oberon awkwardly stood up, knocking the table with his belly in the process. "I'll be back momentarily. Duty calls, dear friends."
Glaring at him, Vincent motioned over to the table where the other young Council members were seated. "This way, Councilman." Hesitantly, Oberon obeyed.
Posted by Hilary Wagner at Friday, June 03, 2011 27 comments:

I am in love, love, love with this cover!  I don't know how Omar does it! Gee, I wonder which one is the White Assassin? I cannot wait for October!!!