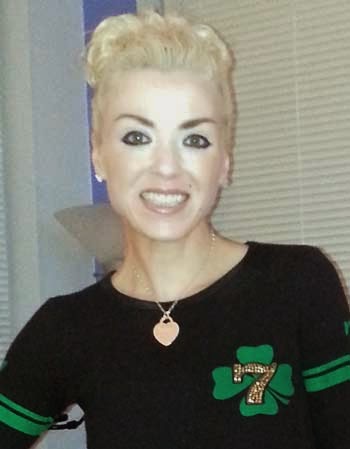 I write middle-grade novels. I love beautifully written, colorful stories, which leave me still thinking about them the next day--a touch of creepy doesn't hurt either! I'm also the founder of Project Middle Grade Mayhem. I started Project Mayhem because there are so few blogs that tackle all things middle-grade. We have a team of great writers, who have all given middle-grade writing a fresh new voice. Please check us out! PROJECT MAYHEM

Okay, the current blurb you might read on stuff:
Hilary Wagner is the author of the middle-grade fantasy series The Nightshade Chronicles (Holiday House). The first book in the series, Nightshade City, is a CBC Best Book of 2011 and winner of the Westchester Fiction Award. The third book in the series, Lords of Trillium, will be released in 2014. Hilary is also part of the 2013 edition of Demigods & Monsters: Your Favorite Authors on Rick Riordan's Percy Jackson and the Olympians Series. She also writes for National Geographic School Publishing and speaks at schools around the world. Find out more about Hilary and her books at www.nightshadecity.com and www.hilarywagner.blogspot.com.

MY BOOKS:
My first novel, NIGHTSHADE CITY, released in 2010 and the second book in the Nightshade Chronicles, THE WHITE ASSASSIN, released in 2011. Currently, both books are available in hardcover and paperback. If e-books are your thing, stay tuned for the fall 2012 e-book release of both books!

LORDS OF TRILLIUM, Holiday House, 2014 This will be the third installment in the Nightshade Chronicles, revealing the mystery behind these special rats.

NATIONAL GEOGRAPHIC
Yes, the NATIONAL GEOGRAPHIC!!! This was such a bucket list moment for me, as I'm a Nat Geo fanatic! I was approached about writing a fictional story for them, after the editor read Nightshade City! How cool is that? I just finished my first project for National Geographic School Publishing and I'm currently working on two more. The first book will release in December 2011.

MY AGENT
I'm super lucky to be repped by Marietta Zacker of Nancy Gallt. She is cool, honest, smart, and funny. What more could you ask for in an agent? Oh, and she's an awesome agent. I guess that's good too! ;)

DEMIGODS AND MONSTERS
I found out in April that I will be part of the new Demigods and Monsters anthology! The book will release in March 2013! It has a long list of great authors in it, including Rick Riordan! I'm so honored to be part of this!

FRENCH RATS?
My rats go to Paris? Yes! French rights to Nightshade City have sold to French publisher Albin Michel! I cannot explain how exciting this is. I took French for 14 years, so it's finally paying off! ;)

A LITTLE MORE ABOUT ME:
I live in the Chicagoland area with my husband, Eric, our two little sweeties, Vincent and Nomi, and I have a distinct knack for not doing housework. I speak at local schools and organizations and I work a normal job too, so in other words, I NEVER sleep! Why sleep when you can write? To find out more about Nightshade City's road from raw manuscript to published book, please click here for the official Holiday House Bio.

If you have any questions about me, my writing or my clearly bleached hair, we can touch base via email here!