Demigods and Monsters! I'm in the new book! 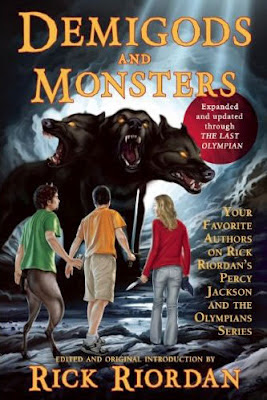 Late one night just a few weeks back, I received an urgent call from my agent, who never calls late, so I knew it had to be really good news or really bad news. Luckily, it was good--in fact great! I was asked to be part of the new edition of Demigods and Monsters, Your Favorite Authors on Rick Riordan's Percy Jackson and the Olympians Series! It was such great news, I can't even put it into words, which is not good considering I'm a writer! ;) The new edition releases in March of 2013 and I'm so blown away that I'll be apart of this great anthology! Contributing authors include, Kathi Appelt, Rosemary Clement-Moore, Paul Collins, Cameron Dokey, Sarah Beth Durst, and others, not to mention the man himself, Rick Riordan!

Thanks so much to Leah Wilson, the Editor-in-Chief of Smart Pop Books, my uber cool "passionista" agent Marietta Zacker, and of course, Rick Riordan! I promised Marietta I would not fly and/or drive to San Antonio to stalk him. ;)

This will be my first nonfiction piece, but I'm a huge fan of nonfiction (especially the funny stuff), so I'm hoping I can make it as fun and engaging as the great essays I've read in the first edition of the book!

About the Demigods and Monsters:

The #1 New York Times bestselling Percy Jackson series—including The Lightning Thief, The Sea of Monsters, The Titan’s Curse and The Battle of the Labyrinth—features a 12-year-old dyslexic boy who discovers he is the son of a Greek god, the target of mythical Greek monsters and the center of a prophecy that could change the balance of power in the world forever. In Demigods and Monsters, YA authors take on Greek gods, monsters and prophecy, to add insight and even more fun to Riordan’s page-turner series.The book also includes an introduction by Percy Jackson series author Rick Riordan, that gives further insight into the series and its creation, and a glossary of ancient Greek myth, with plenty of information on the places, monsters, gods and heroes that appear in the series.

Okay, so there you have it! Sorry for all the exclamation points! Now I must go back to work and try and come down from Mount Olympus! ;)