My REAL Rejection Letters & Why You Should Never Give Up! 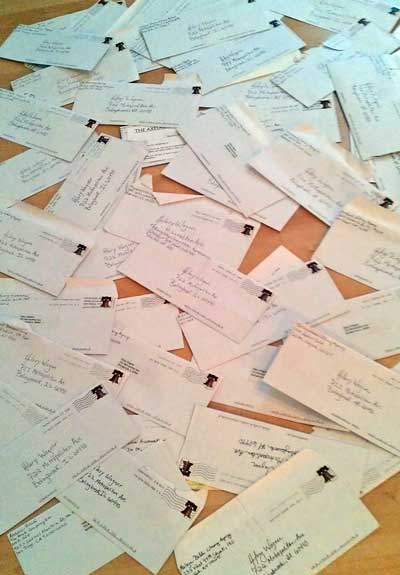 This is not some random picture I pulled off Google, these are the actual rejection letters I received from literary agencies from 2008-2009. There are about 75 letters in all, not to mention 150+ email rejections. I'm sure you can do the math. I wanted to toss these into the trash as even now they're a bit hard to look at, but my husband forced me to keep them. He said I'd be happy I did later on, and he was right. Since my first book, Nightshade City, was published, it's won the Westchester Fiction Award for 2011, it's been named a CBC Best Book of 2011, and is a Goodreads Choice Award and SCBWI Crystal Kite Finalist for 2010. I'm invited to speak to kids and other writers on a regular basis and they actually are interested in what I have to say, which is pretty darn cool for a girl who four years ago decided to write a random book about rats--of all things. Nightshade City also resulted in my job with National Geographic, as a Nat Geo editor read it and then contacted me to see if I'd be interested in writing for them. I guess what I'm trying to tell you guys is it's darn hard to get published, but my story is one of the many examples that it is entirely possible and there are many good things to come if you can weather the storm.
Around this time of year we all wonder about our goals in life and if we'll ever reach them. I cannot say I didn't get defeated back then, with my ever growing pile of rejection letters, but I can say, I didn't give up...so don't you do it either.
I mean it. Don't give up or I will hunt you down and slap you around a bit!
HAPPY HOLIDAYS TO ONE AND ALL!
Hilary
Posted by Hilary Wagner at Wednesday, December 21, 2011