Name that Rat Contest for Book II of the Nightshade Chronicles! 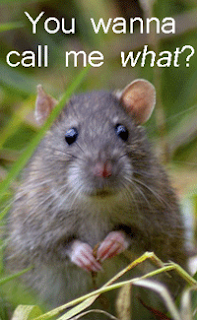 Okay, so I'm writing part two of Nightshade City's sequel which is due to my publisher on October 1st, the same day Nightshade City releases! Gah! So, in honor of that, I want to do something fun and get your help naming one of my characters, who will appear in the sequel!

Who is this nameless rat?
He's a sweetheart through and through, but let's just say he's not the sharpest knife in the block. He's the kind of rat who knows not to give out a secret, but can be easily swindled into giving it up without even realizing it. He looks up to grown rats like him, but sees them more as parents than equals. He's lanky, with a gawky build, long necked and unkempt brown fur. He's chews on his claws quite a bit and pulls on his ears when he's nervous. His favorite food is a very sour root called Waterchip and he's been known to fall asleep in the strangest of places!

Rat Naming Rules:
Please no goofy names like Mr. Pickles or Peanut Butter. It can be a common name or something unusual, but I'm going to tell you that Doug the rat will most likely not win! Ha, ha! I like unusual, but not too weird--a name that could translate over to our world, even though it might be considered a bit odd. It really just needs to be something that suits his description. Some examples of my characters names: Juniper, Billycan, Killdeer, Texi, Virden, Suttor, Vincent, Victor, Clover, Cole, Cobweb, Montague, Thicket, Stono...hopefully this will give you an idea of the kind of names that work! Please follow my blog if you don't already by clicking on the google followers link. You can put your entry in the comment section, but please only give one or two name ideas.

On Friday, I'll post the winner and that name (maybe the one you came up with) will be published in Book II of the Nightshade Chronicles!

Naming characters is a favorite part of writing for me, so have fun with this!  I can't wait to see what everyone comes up with!