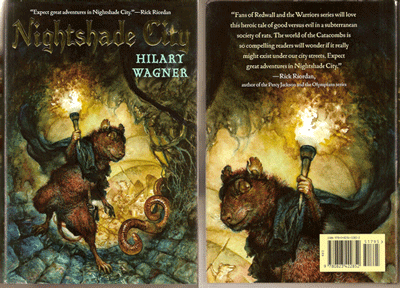 The Nightshade City hardcover arrived at my door last Friday! I have to tell you, holding the ARC in my hands was amazing, but holding the actual hardcover, the book that will be sold in stores, feeling that raised gold font on the jacket, heck, even seeing the bar code, is an unforgettable experience! On top of that, I finally got to see the amazing interior illustrations Omar Rayyan created. Below are some key players I'd love to introduce! 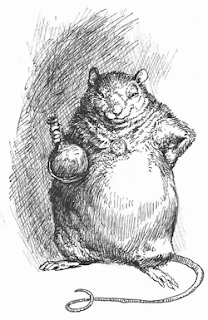 Killdeer is the High Minister of the Catacombs. He is large and in charge and someone you don't want to mess with--rather a nasty rat, who's quite convinced the world revolves around him. He is suave and charming and the only thing worse than being out of his Oshi berry wine, is having to actually run his kingdom.

Billycan is Killdeer's second in command.  He's left with the duties of running the Catacombs, not to mention cleaning up after Killdeer's messes. He is the Commander of the Kill Army and the High Collector of Stipend. He's an albino. To be exact, the only albino left in existence.  An ex-lab rat, Billycan has a fondness for brutality, not to mention collecting a misplaced tongue or two. In other words, not a kindly fellow.

Mother Gallo is a kindly soul, forced to work as the High Mistress of the Robes, a seamstress for Killdeer and his army.  She does her job and she does it well, but she's hiding a secret--and a very dangerous one at that.
Juniper Belancort--a rat among rats. Juniper knows to well of Killdeer, Billycan and their crimes against the rats of the Catacombs. He is a rat of principle, a rat who believes in doing what's right and never letting a few decide the fate of many.

So there you have it.  A few of the Nightshade City players! Only 3.5 months until they are sitting on a shelf near you!
Happy reading!
xoxo -- Hilary
Posted by Hilary Wagner at Wednesday, June 16, 2010